Our humble roots in PVCA

LARD: It's more than pork fat. It's a family of hardcore paddlers based out of Los Angeles, CA, who rip through bodies of water in their mighty dragonboat.

Consider this: a mere hundred grams of LARD contains 900 calories of energy. We pack in a boat of 20 paddlers; that equals more than a ton of LARD.

That's a whole lot of power behind the dragon. The Los Angeles Racing Dragons (LARD) had its start in 1996. A group of parents and children from the Pomona Valley Chinese Association (PVCA) formed a team to participate in the first annual International Cultural Exchange Association (ICEA) Long Beach Dragon Boat Competition featuring more than 20 teams. Despite having had only a few practices, the novice PVCA team won Third Overall, finishing behind two well established competitive team; one from Taiwan and the other from the San Francisco bay area. The following year, the team competed in Long Beach and performed well again. The two years of local competition fueled a desire to become serious contenders in the dragon boat arena. The team dedicated itself to evolving from a team that only competes in local tournaments to an internationally competitive team; The Los Angeles Racing Dragons.

LARD is comprised of people from a wide range of ages, occupations, and backgrounds. What binds the team is our common passion for the sport, our desire to see the team continue to improve, and an interest to promote dragon boat racing. 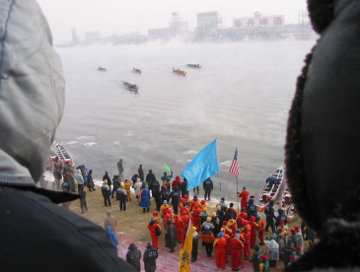 In 2002 and 2003, some LARD paddlers participated in international tournaments in China, as well as being invited to Taiwan. Also in 2003, LARD was approved for 501(c)3 Federal Non-Profit Status and helped founded the Los Angeles Pink Dragons (LAPD), an all breast cancer survivor crew. In 2004, LAPD officially joined the Los Angeles Racing Dragons Foundation.

In the past few years, LARD has established itself as the premier Los Angeles area dragon boat team and have gone head to head against nationally ranked teams in regional competition, earning the respect of our peers all over North America

The Los Angeles Racing Dragons Foundation is a non-profit tax exempt organization 501(c)(3). Please consult your tax advisor on the tax deductibility of your donation.